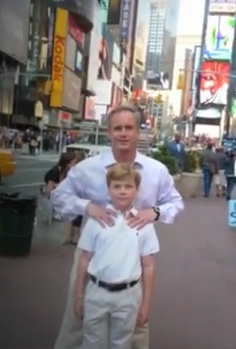 My son Kenan and I had the opportunity to meet Richard Branson in New York in May 2010. My goals for the meeting were to discuss a leadership initiative/book that I had been working on and to inspire Kenan by introducing him to one of the finest social entrepreneurs who has ever lived. As you’ll see in the article, Kenan stole the show!

This week, Sir Richard Branson was in New York for several press events: the Time 100 Gala on Tuesday as well as a daylong conference called The Courage Forum on Wednesday, which was sponsored by the Americas Business Council and was meant “to find inspiration in the brave individuals that inhabit our world today.”

Mr. Branson was also in town to meet Kenan Kitchen, an 11-year-old fledgling entrepreneur from Chapel Hill, N.C. Mr. Kitchen’s father, Jim, had bid on some time with Mr. Branson in an online auction a year or two ago, paying in the range of $10,000 to $15,000 for the experience. A trip to Ulusaba in South Africa, where Mr. Branson has a private game reserve, is in the cards.

“He wants to make sure his son will have a rich and fascinating life,” Mr. Branson said of the Kitchens, in a many-windowed conference room at MoMA, on a break from the Courage Forum. He had just finished signing a copy of Monopoly for the young Mr. Kitchen, who was dressed nattily in a crisp white oxford shirt and khakis and is a fan of the board game.

“I’ve been playing Monopoly in real life and as a game all my life,” Mr. Branson said. “Go to jail? Yes, done that once.”

Read the entire article online in the WSJ.

Jim looking at the Astronomical clock in Prague, Czech Republic Went to the Czech Republic with my father in 1997 on a GATE 1 tour, and also with my MBA program at the University of Tennessee. Toured Prague, the Royal Castle at Hradcany, the Charles Bridge, and the...
Read More

Peni Dovi from Nadi, Fiji Island Bula! On the 8th of March 2017 I was assigned to take a PRIVATE TOUR for a Half Day Village Tour to Nausori Highland a remote Fijian Traditional village just an hour drive from NADI town 900 meters above sea level. This medal was...
Read More

Where the country gets its name ... from the white sand coast Jim's Perspectives: From the moment you arrive in Cote d’ivoire you can tell this place is different than the other countries in West Africa. It has a more upbeat vibe despite its many uprisings and civil...
Read More