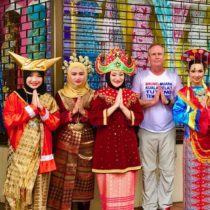 In 2016, I was incredibly fortunate to be in Brunei on its National Day, celebrating its (33rd) independence from Britain in 1984. Its downtown streets were lined with 33,000 members of the military and students from schools from all over the country. I got a chance to see the Sultan himself as he drove by in his swanky white Rolls.

Brunei clearly has its troubles, and is considered one of the more restrictive countries in the world. Here’s some information about LGBTQ rights:

Lesbian, gay, bisexual, and transgender persons in Brunei face legal challenges not experienced by non-LGBT residents. Homosexuality is illegal in Brunei. Sexual relations between men are punishable by death (stoning) or whipping; sex between women is punishable by caning or imprisonment.

While it’s hard to get past those seemingly myopic and mean-spirited restrictions imposed by the government, this tiny country, barely the size of Delaware, has a lot to offer. After being here, I have to say I’m shocked by Trip Advisor’s ho-hum guest reviews of the place … because for a small country, it has it all. 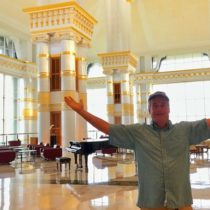 Let’s start with my hotel, The Empire. Wow, just wow. Certainly one of the finest I’ve stayed in across the world, rivaling even Dubai’s Burj Al-Arab. The lobby was spectacular, the rooms facing the South China Sea were warm and inviting, food was wonderful, but the pool/beach area was like something I’ve never seen: the pool from end-to-end must’ve been ¼ mile long. 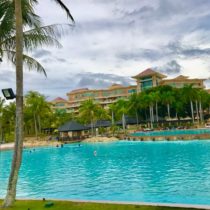 Brunei’s highways were filled with bikers and runners, and on Sundays they devote entire lanes to sporting activities. The water village, sitting on stilts across from downtown, is a fascinating collection of 33 villages of fishermen, complete with restaurants, markets, schools, mosque, etc. Although I didn’t go on one, the jungle tour is supposed to be wonderful, as is the scuba diving. 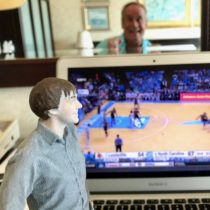 Brunei is a very upscale, energy-rich monarchy on the northern part of Borneo. Oil and gas exports make up 65% of its GDP, with most going to Japan. It’s GDP is the 4th highest in the world, and as such, its citizens enjoy free medical care and education (through college), and pay no income tax. Speaking of education, many expats teach in schools throughout the country, and most (96%) children in Brunei are literate and speak British English.

Typical street scape in Guinea Jim's Perspectives: One of the last countries to be colonized by the French in 1890 and was one of the first countries in West Africa to gain their independence in 1958. The capital, Conakry is a big hustling bustling mass of a city that...
Read More

In 2017, went to Cuba with my son Kenan! We had such a blast traveling to this quirky and cool destination. Here was our itinerary with Cuba Adventures Travel: Day One: Took a private walking tour of Old Havana with our guide. Checked out the art, architecture,...
Read More