The capital of Cambodia is Phnom Penh. There are approximately 16,000,000 people living here. The official language of Cambodia is Khmer. The majority of the population practices Theravada Buddhism. 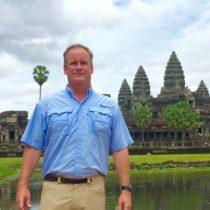 Adventurers in Cambodia will enjoy the historic Angkor Archeological Park, home to the ruins of the ancient Khmer civilization. Also of interest is Bokor National Park, to see the historic ruins of the Black Palace. This palace was built in 1936 and was the residence of King Sihanouk. Also of interest in Bokor National Park is the Old French Hill Station, which was used by the French as a pre-air conditioning retreat from the scorching Cambodian heat.

One fun fact about Cambodia is that the Cambodian flag is the only flag that has an image of a building, the Visahu Temple—the Angkor Wat. 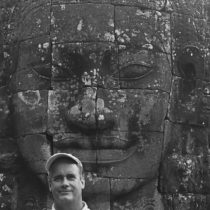 Most (80%) of the 16 million Cambodians depend on farm life. 4 million live in Phnom Penh.

In Cambodia, there is bitter animosity between Cambodians and Vietnamese from events before and after the Vietnam War and brutality of Pol Pot.

Angor Wat and surrounding temples are spectacular. Downtown Siem Reap is lovely with shops, restaurants, along the river. Siem Reap, in Thai (Siam), means defeated. I Ate dinner at Chanrey Tree.Here, you don’t need to convert money—all bills everywhere are in USD. 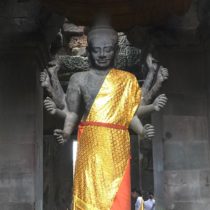 Let me tell you… get a Cambodian talking about Pol Pot & Killing Fields… whew! Wow, talk about some violence! The brutality of Pol Pot: Khmer Rouge is reminiscent of Stalin’s collectivization. On April 17, 1975, after the Vietnam War, Pol Pot comes to power after the post-war destruction and within 2 weeks Phnon Penh goes from a city of 3.5 million to 72. Yes, 72. Everyone was sent to a farm to work in the rice fields in 12-15 hour days. Children the age of 7 and over were forced to toil in the fields and given little food in which to survive (the rice was sent to China). During the 3 years, 8 months and 20 days (January 9, 1979) 3.5 million people died both of starvation and exhaustion (2.5 million) but 1 million were executed in 384 mass graces throughout the country. In the “Killing Fields” outside of Phnon Penh, over 20,000 of the intelligencia were executed—doctors, lawyers, teachers, engineers, smart farmers, and elderly.

Pol Pot: Khmer Rouge found the young farm children much easier to brain wash. All education facilities, hospitals, and other institutions were closed.
After Pol Pot was displaced, in 1979, the Vietnamese invaded Cambodia and they were no better. Life still remained difficult for Cambodians because they were conscripted into the military to fight Korea in the mountains along the Thai border. Where there were 30 million land mines. 20-25 people per week died. Cambodians died every day in the struggle. The Chinese sided with Korea and the USSR sided with Vietnam. 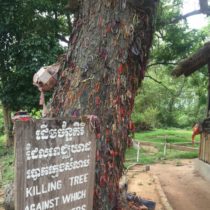 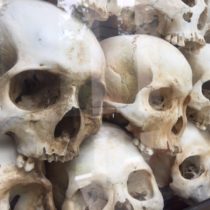 When the USSR collapsed in the late 80s, Vietnamese left to get their own country in order and the UN stepped in to help. Free elections were held and conditions improved with many starting businesses. However, trouble still remains: 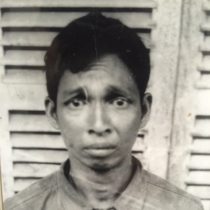 Jabbar Ustad lives in Ashgabat with his wife and two sons and is working as a tour guide for Owadan Tourism in Turkmenistan.He was born in a refugee family in Shibirghan, Afghanistan in 1959.His family was a victim of Stalin's Collectivisation Program of the Soviet...
Read More

To get from Turkmenistan to Tajikistan in '16 I had to fly to Dubai, endure an 6 hour layover and then fly 3 hours to Dushanbe. Tajikistan is the smallest of the “Stans” in terms of population and definitely the poorest. This country has recovered little since its...
Read More

In lovely Amsterdam prior to cruise, 1992 Amsterdam is, in my opinion, one of the most beautiful cities in Europe. Have visited twice and I absolutely love this place! You should visit Amsterdam for its beautiful canals, architecture and explosive night life. Visitors...
Read More