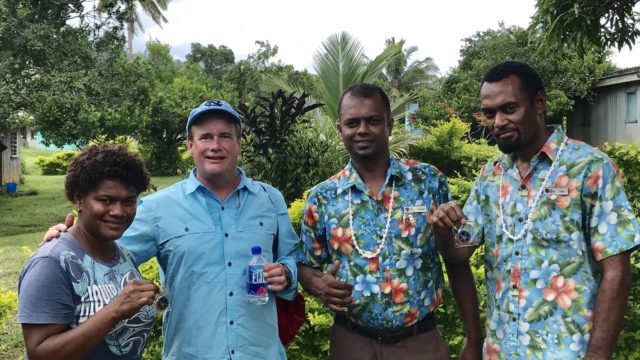 Country Information: Fiji gained independence in 1970. About a million people live here, and the main languages are English, Fijian, and Hindi. The weather in Fiji is almost always perfect for going to the beach. Temperatures stay between 79 and 89 degrees year round (26-31 degrees Celsius), even in winter months. This makes Fiji a highly sought after vacation spot! Its main exports are sugar, clothing, gold, timber, fish, mineral water, molasses, and coconut oil. The time zone is a whopping 17 hours ahead of EST.

Visiting Nadi and Suva. Nadi is a major tourist hub, with lots of hotels, restaurants, activities, and souvenir shops. The Main Street is where travelers can enjoy searching for clothes, jewelry, electronics, and more while listening to the latest Hindi or Fijian music playing in various shops.

Suva is the political capital of Fiji, the largest city in the country as well as a very cosmopolitan city in the Pacific Islands. Despite being a modern city, it still has architecture dating back to the colonial era.

Some unusual facts about Fiji are (in villages), only the chief can wear hats and sunglasses. The top of the head is seen as sacred and cannot be touched. Also interesting is that Fiji is on the International Date Line, meaning you can stand on that “line” and have one foot in the present and the other in the past.

333 islands make up Fiji, with “Viti levu” being the main island. Viti is synonymous with “Fee Jee”, which is what the Fijian’s nemesis (Tonga) called them. Hence, the name Viti turned into Fiji. When American troops were stationed in Fiji in the 30s and 40s, they had trouble pronouncing Nadi, and called it Nandy instead … and the name stuck.

British missionaries arrived in 1835, when the tribes were still warring with the Tongans and one another. Cannibalism, witchcraft and idolatry were still commonplace. In 1867, after missionary Thomas Baker insulted a tribal chief (Baker grabbed a comb out of his hair … a no-no as heads are sacred in this culture), Baker was cooked and then eaten, along with his socks and shoes. It turns out that the fleshy part of the hand, behind the thumb is the part of the body saved for the tribal leader to consume. Huh, who knew? In 1882 the Brits and Aussies, using Indian Hindus as indentured servants, exploited the Fijians by building an enormous sugar cane refinery in Suva.

In 2016, I learned some important terms to know when visiting this island:

Had a chance to go to the small village of Nousari Highlands, about 1.5 hours from Nadi, up about 3,000 feet in the mountains where life is much quieter and simpler. While there, I chatted with some locals, made and drank some kava, prepared some food, and guest lectured at a school.

Where to stay while in Nadi?

When I go back to Fiji, I hope to dive in the Maranucas, a 1 hour boat ride to these dive sites: Aqua Trek mara shark dive, Plantation Pinnacle, Na motu Wall, Monuriki Wall, which is where the movie Castaway was filmed.

In the Ukraine in front of a Soviet ICBM, 2015 Many types of ICBMs in the Ukraine During my time in Ukraine in 2015, I drove hundreds of miles across the countryside in order to see a Soviet nuclear missile silo, which in the region, had 7-8 ICBMs stationed there. It...
Read More