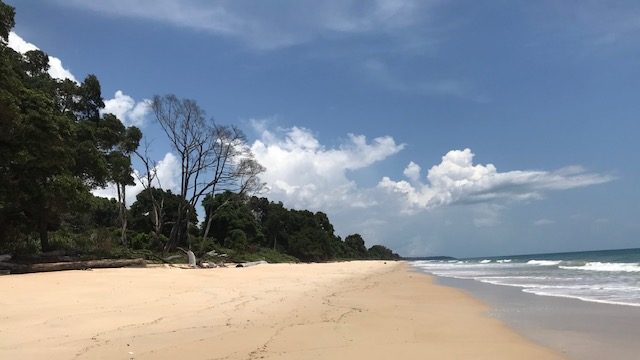 Country Information: About 2.5 million people live in Gabon, and the capital is Libreville. The official language is French, though a smaller percentage of the population also speaks called Fang. The main religion is Christianity, primarily Roman Catholicism and Protestantism. The time zone is 5 hours ahead of EST.

Gabon’s vast gains in GDP come from selling oil; however, the country has been trying to increase profits from ecotourism and other tourists excursions to prepare for when oil resources dwindle, and the government is actively seeing to support the tourism industry.

BLOT. Bottom. Line. On. Top. I teach my entrepreneurship students at UNC this acronym. And the BLOT of Gabon is this is my favorite country in Africa that I visited in 2018!  Good Lord willing, I hope to return soon to this lovely, up-and-coming country. It’s an absolute gem, and not to be missed.

The capital city of Libreville, like its architecture, is nondescript. Tourists would likely stay at the Radisson or its sister property, and would be content with a view of the ocean. But Gabon is like a sweet piece of fruit wanting to be peeled! Before we get there, let’s discuss the top things to do in and around Libreville:

The 7 day ceremony are led by a spiritual teach, and I got to meet “Tatayo”, the father of Bwiti in Gabon, who has extensive experience in healing practices.  When meeting Tatayo, you can’t help but think he is the doppelganger of Keith Richards.  He’s affable and opinionated, and has helped many people overcome their addictions. He recounted a fascinating story of a dog with flees and finding a mask (that he showed me) in the ocean.

In the temple, there was a young man who had been initiated 2 days previously.  He was laying in a semi-comatose state, recovering from the week long ceremony.  Wow.

However, the real magic of Gabon, is about a 30 minute boat ride from Libreville, in Port Denis. If you’re considering a 2-3 night stay in Gabon, do yourself a favor … don’t stay in Libreville … and do anything it takes to book a room at La Baie or better yet at the Pongara Lodge. If you do … I promise you’ll thank me … it’s that wonderful.

I had planned to do a city tour of Libreville, and instead at the last minute got someone to take me to Port Denis. At 930am, I boarded a small boat that took everyone to the main lodge tin Port Denis’s beach, on the edge of the Pongara Reserve. The ride over was breathtaking. We past by some of the most pristine white sand beaches I’ve ever seen.  Fish were teeming in the blue-green ocean and the puffy clouds hung softly in the sky.

Upon arrival, I was struck by the contrast of the powder white sand and the verdant green forest. This 577 square mile National Park of savannah and forest was spectacular. Monkeys, chimps, numerous bird species, buffalo, and get this … forest elephants roamed the beach. Humpback whales visit here (just offshore) and leatherback turtles lay their eggs on these beaches and the hatchlings make their way to the ocean in a January & February spectacle. This place is like Eden!

Took a 4 x 4 down the beach to the Pongara Lodge, which was one of the most amazing places I’ve ever visited in my life. This six room oceanfront lodge has an open-airy bar and restaurant tucked under a canopy of trees, overlooking the shore line. The lodge rooms are elegantly done, with hardwood floors, comfy beds, air conditioning, and porches facing the ocean.  A herd of 8 elephants also loves this place … visiting every day at morning time! This is why I want to return so badly – to watch Gabon’s elephants frolic on the beach.

Abbad, a Gabonian, and owner of four of the lodges surrounding Pongara, invited me to stay the night at Tortuga, and I jumped at the chance. I did 3 safari drives, seeing many animals and beautiful scenery. The food was delicious and the staff couldn’t have been more gracious.

Upon leaving the following morning, I was both refreshed and sad. This place FED MY SOUL … and I was going to miss it.

Beautiful mountain vistas in Kosovo Downtown Prizren in Kosovo In 2015, we drove through much of Kosovo and overnighted in Prizren, a quaint and attractive historic city located on the banks of the Bistrica river, and on the slopes of the Šar Mountains in the southern...
Read More

Country Information:  The capital of Gambia is Banjul. There are approximately 2.5 million people living here. The official language of Gambia is English. The majority of Gambians practice Islam.  Major exports of Gambia are peanut products, fish, cotton, and palm...
Read More