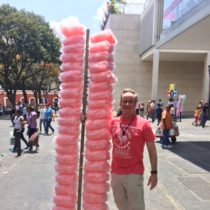 With the worsening relations between Venezuela and the US, I was concerned about getting a tourist visa to travel there.  I’m please to say that I received my visa the day before I left on a trip to Central and South America in 2016. I had to fly to Washington DC to fill out forms and then I called the embassy daily to find out when I’d receive it. I literally called the embassy 75 times enquiring about my visa, trying to befriend someone there. I also had my tour company reach out to the embassy, pleading for it to be issued.

Venezuela is 1/3 larger than Texas and has 30 million people, 8 million or so who live in its capital city of Caracas. Caracas, at the moment, is in utter disarray. It has the dubious distraction of being the world’s murder capital with 24,000 + homicides last year. The fear is palpable. Many suspect the government is complicit or at a minimum, has turned a blind eye toward the Chavista gangs who kill and kidnap on a daily basis. Caracas’s streets are still at night, which likely a comfort of Venezuela’s president Maduro. Although this economic crisis isn’t his making, it will likely be his undoing.

A little history lesson on Venezuela shows that their history is similar to other’s in the region. Meaning, the Spanish conquered in the 1500s searching for riches—the El Dorado or mythic land of gold. Venezuela gave Latin America Simon Bolivar, who later recruited British vets, an army of horsemen.Venezuelans drove out the Spanish in 1819. Then the Gran Columbia was created which combined the countries of Venezuela, Columbia, and Ecuador—an alliance which lasted only 10 years. Venezuela is a country mostly dependent on the export of petroleum, steel, aluminum, coffee, and fruits. The discovery of oil in the ’40s resulted in an economic boom in the country lasting 40 years and giving of Latin America’s highest GOP. However, when the price of oil collapsed in the ’80s and inflation became uncontrollable, there were food and medicine shortages and street demonstrations led by Chavez.  Chavez then became president in ’98 and implemented many socialist reforms to re-distribute the country’s oil wealth. 7,000 companies were seized by the government, including Venezuela’s key industries: cement, steel, telecommunications, utilities, tourism, and of course, petroleum.

Fast forward to today: the prices of fuel have free-fallen to $30/barrel, which is barely above production price. Without USDs (the international currency pegged to oil), the government has little money in its coffee. Inflation is rampant. Venezuelans are paying 6 times more for gas then they were last year and twice as much for soda as 1 month ago. The average salary is 9,000 Bolivar/mo., but a quarter of milk is 360 bolivar, a can of tuna is 750 Bolivar, a bag of pasta is 2,000 Bolivar. Had a fascinating trip to a local grocery store, looking on to people waiting in line for bread, limited to just 2 loaves. ($1= 700-1000 Bolivar on the black market).

Country Information: The capital of Burkina Faso is Ouagadougou. About 18 million people live here and the official language is French. Burkina Faso is religiously diverse and exercises freedom of religion; that being said, Islam is the most popular religion followed...
Read More

Country Information: Fiji gained independence in 1970. About a million people live here, and the main languages are English, Fijian, and Hindi. The weather in Fiji is almost always perfect for going to the beach. Temperatures stay between 79 and 89 degrees year round...
Read More