It’s been a goal to explore Papua New Guinea, which is why it was one of the last countries I visited, in 2019. However, things did not go as planned to visit here on an extended trip, but nonetheless I had a wonderful several days here in the northeastern part of the country.  Here were the highlights of my stay:

Learning How to Make Fire  Remember you were a kid and you heard you could rub sticks together and make fire?  Well had a chance to do try that today, and with the right, dry, soft wood, it wasn’t too difficult. 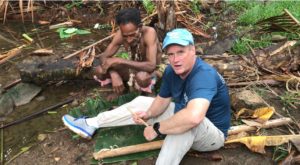 Fire – the most radical innovation of all time   !

Papua NG has the most fascinating tribal cultures remaining in the world and I prepared the way the locals did for a traditional ceremony called a sing-sing, where the tribes gather to celebrate major holidays and big events like weddings.

They get dressed up in their traditional outfits, paint their faces, add feathers, they have competitive eating contests, they beat their drums loudly, they dance, eat some more, and of course, they sing the traditional songs their ancestors sang centuries ago. 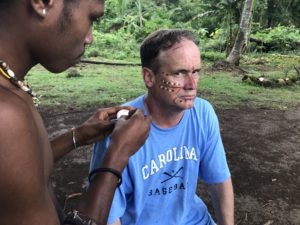 A very important custom that women in Kafaururu and other surrounding regions participate in is getting their faces tattooed. All face tattoos follow the same pattern, centuries old and is everywhere: it’s on clothing designs, on wall hangings, even etched on ancient stone carvings.

Single girls, as a sign of maturity have their faces tattooed. Prior to having this done, they can’t socialize, they can’t get married. After they have it done and go through a tribal initiation hey can get married, party in public with friends and they become a contributing member of the community’s social fabric. This is painful … as the ink is settled by piercing the skin with thorns. And while only a small percentage of the young girls have this done now, it is still an important tradition that has been passed down for centuries here in Papua New Guinea. 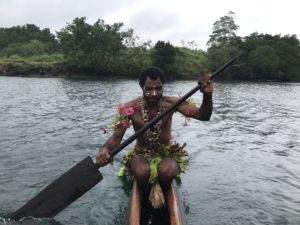 The first Europeans came to PNG in the early 1500s and called it “Papua”, because of the frizzy hair of the local people. The British, Dutch, the Germans and the Aussies all occupied this country, using it as a cheap labor source for the huge cocoa and copra plantations here. The Japanese also occupied much of the country during WW2, and fierce battles were fought here.

Papua New Guinea has more than 600 islands, 7 million people and 800 languages are spoken here.  And this area is so densely forested … that the hundreds of tribes here have been isolated for centuries.

And of note, some of these tribes have engaged in cannibalism until 20 years ago, and some like the Korowai tribe state they claim to still practice cannibalism.

If you ask me what’s my favorite place on planet Earth, one of the two countries / places that would likely come out of my mouth would be Australia … Lizard Island in Australia specifically. I was there in 1992, and haven’t forgotten about it since. photo credit...
Read More

Country Information: The capital of Libya is Tripoli. There are approximately 7 million people living here. The official language of Libya is Arabic, with Italian and English spoken widely in all major cities. The majority of the population practices Islam. Tourists...
Read More