“Our core mission is to refurbish and award used computers to students in grades 3-12 who don’t have a PC at home,” executive director of the Kramden Institute Michael Abensour says.

All recipients had one or more school-aged children who met the requirements for the program.

The machines and accessories are given to Kramden through either individual or corporate donations. All unused equipment is recycled by Synergy Recycling.

Abensour says technology is something people take for granted, but can make a big difference in a person’s life.

“There’s a large pool of the population that doesn’t have those tools,” Abensour says. “We figured that by taking used computers, computers that people were really trying to cycle out, (and) that still had some useful life in them, that we could refurbish them with our volunteers, award them to students, and that would make a huge impact in their lives.”

Included in the package are a refurbished computer with an LCD monitor, a flash drive and free internet access for a year.

Jim & Superintendent Tom Forcella talk about the impact of the day

Although some student may have access to a computer at school, Abensour says having a computer at home is important for getting work done.

“A lot of the families we work with overlap the free and reduces lunch programs (and) are families in need,” Abensour says. “They don’t have PCs at home so we kind of fit into that critical spot where you might have access to computer labs at school and you can do your work there. Afterwards, what do you do when the student comes home. That’s where we fit in. We finish that last link to get them connected.”

The institute’s reach is not limited to the Triangle as residents in 57 of the 100 counties in the state have received a computer. They hope to award 2,500 computers this year and are more than halfway to their target.

If you have a computer to donate please visit Kramden.org for more information. 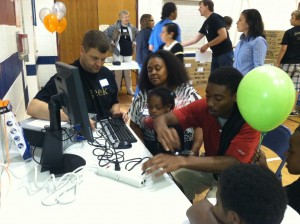 The Grand Canal in Venice Family at the Colosseum in Rome Jim's Perspectives: Traveling with the family has been the biggest highlight! After 100s of solo journeys around the world it was fun to play tour guide in Germany, Switzerland and Italy. After landing we took...
Read More

A week prior to leaving for Iran (in '16) I still did not have my visa and I was getting a bit nervous. This is a country that has had US sanctions imposed on it since the 70s and gets few visa requests from Americans. I’m sure that my request was thoroughly vetted by...
Read More

With the worsening relations between Venezuela and the US, I was concerned about getting a tourist visa to travel there.  I'm please to say that I received my visa the day before I left on a trip to Central and South America in 2016. I had to fly to Washington DC to...
Read More