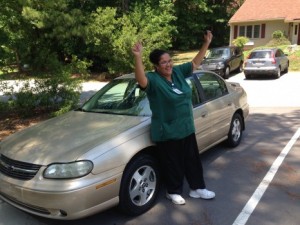 Dawn Receives Her New Car Made Possible By UNC Students

A Hillsborough woman was surprised on her lunch break today with a new car, paid for by UNC business students and social entrepreneurs.

Dawn Sheppard walked to the parking lot of Carol Woods Retire Community and was greeted by a host of friends, members of the Community Empowerment Fund and a gold Chevrolet Malibu.

“I’m just so excited, I’m very excited,” Sheppard said with tears in her eyes and a smile on her face.

Kitchen, a social entrepreneur and instructor of Entrepreneurship & Business Planning at UNC’s Kenan-Flagler Business School, teamed up with the Community Empowerment Fund to select Dawn Sheppard as the second recipient this year of a new car. The first giveaway was also in collaboration with CEF and was done in May.

“She has really gone through a lot of things in her life and she is in a transition in her life and we thought that some reliable transportation to and from work is so important to her; that’s why we’re here today,” Kitchen said.

The CEF nominated Sheppard as a deserving recipient and teamed up with Kitchen and his business students to purchase a car from Mark Jacobson Toyota. Through their Trade-Up project, students traded koozies for more valuable items, and then sold those items to raise $5,000 for Sheppard’s new car.

Kitchen and his students also made sure the car came with $500 credit at a local garage for any maintenance needs Sheppard may have in the coming months.

Sheppard has been involved with the Community Empowerment Fund since moving out of the women’s shelter in 2011. She has battled homelessness for years and says her new car is a blessing.

“I don’t have to worry about keeping up the maintenance,” Sheppard said. “It’ll make life a lot easier.”

To help sponsor a Saver or donate to the Community Empowerment Fund of Chapel Hill, visit http://www.communityempowermentfund.org/

If you have a reliable car that you are willing to donate to someone in significant need, contact Jim Kitchen at jim@jimkitchen.org

Note from Jim on 6/27/14: I received this very kind follow up e-mail from Maggie West, the Director of CEF:

Thanks so much for making the car presentation to Dawn happen on Monday – truly amazing, and deeply appreciated.

I wanted to just quickly share a story with you that I thought you would really appreciate. The next morning, I woke up to several voicemails from one of CEF’s members which she left on my phone around midnight in a panic because her car had broken down and she couldn’t get home from work. I called her back that morning, worried that maybe she never made it home, only to find out that Dawn had come to her rescue, picking her up in her new car in the middle of the night, and even using the battery from her old car to try to reboot the other member’s vehicle.

One of the amazing things about Dawn has always been that even with her clunker car that was always breaking on her, she would never hesitate to drive to Timbuktu for a CEF friend in need. When I spoke to this other member that morning, she was absolutely glowing about, “of all the people you could pick for Jim Kitchen to help with a car, there is no better person than Dawn because that will mean it is really the whole community’s car!” — I thought that was just lovely (partly because for a second I was worried that the end of that sentence was going to be questioning why we hadn’t referred this member to be the recipient!).

All that to say – thank you for being generous yourselves, and in turn enabling Dawn to pay it forward with continuing generosity.