Have been to Austria and Vienna several times, once with my father while on a GATE 1 tour of Poland, Czech Republic, Austria and Hungary in 1997, and with my MBA classmates. We visited the Hofburg Palace, Schonbrunn Palace, and St. Stephens Cathedral. Also, went to Austria with my son and stayed right in the middle of downtown! 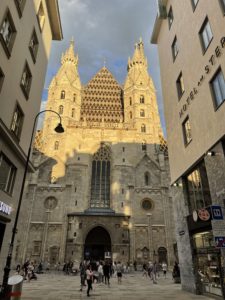 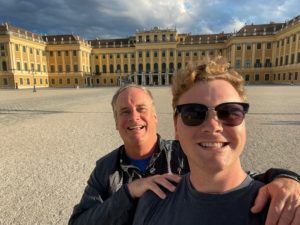 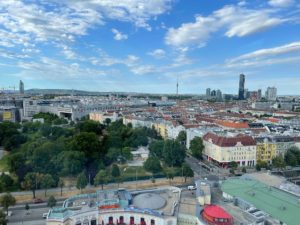 Austria is the country to visit to see biodiverse life; it is one of the most forested countries in Europe with almost half of the country covered in forest lands. Austria is also a leading country in environmental sustainability.

An amazing place to visit in Austria is Eisriesenwelt in Salzburg, a German word meaning “World of the Ice Giants.” Eisriesenwelt is the largest ice cave in the world!

An interesting historical fact about Austria is that, after WWII, the Austrian Parliament declared Austria to be a permanently neutral country. The country also chose to not use any nuclear energy and is trying to gain support for non-nuclear energy research. Also interesting is that Austria is famous for its musicians; Mozart, So were Haydn, Schubert, and Strauss were all Austrian.

Country Information: The  Republic of Austria, founded in 1804! The capital is Vienna. About 8.5 million people live here and the primary languages are German, Slovenian, Hungarian, and Austrian German. In Austria there is religious freedom, but many Austrians are Roman Catholic followed by smaller Protestant, Islam, and Christian Orthodox followers. The top exports are cars, vehicle parts, machinery, packaged medicines, refined petroleum, crude petroleum, metal goods, iron, steel, and textiles.

At the "Door of No Return" in Senegal One the funniest signs seen while traveling the globe! Wrasslin' with the big boys in 2017 Jim's Perspectives: Took off from Tome, flew to Brussels and then arrived in Dakar about 10 hours later. It’s a bustling city, a...
Read More

In the Ukraine in front of a Soviet ICBM, 2015 Many types of ICBMs in the Ukraine During my time in Ukraine in 2015, I drove hundreds of miles across the countryside in order to see a Soviet nuclear missile silo, which in the region, had 7-8 ICBMs stationed there. It...
Read More