Have been to the Bahamas more than any other country … probably 50-75 times!

In 1987, I started a travel business specializing in group tours to the Caribbean and Freeport, Bahamas was our primary destination. We contracted with Discovery Cruise Lines and brought about 12,000 people to the island during the month of March. 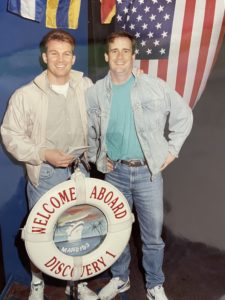 So many Bahamas stories … but I hope you enjoy this excerpt from my book. The picture to the left was taken before this event:

“Early in my travel career, my business provided tours to the Bahamas, and we quickly established ourselves as a market leader in that endeavor. Business was great and life was good. It seemed entirely appropriate that the sun was shining and the waters were smooth when I left Fort Lauderdale one March morning on the Discovery 1 with twelve hundred customers who had signed up for a cruise to Freeport.

When we left the port, the passengers on board were all eating breakfast, sunning themselves in the deck chairs by the pool, or getting ready to try their luck in the ship’s casino. My high school friends, Bill and Rick, were along to help out with the huge number of passengers, and we were all strutting around the ship wearing official company T-shirts and making promises we couldn’t keep to our more attractive female guests. Calypso music was being played on the deck by a live band, and the air was filled with the anticipation of a fun time for all.

I noticed the wind picking up a bit once we were a few miles out into the Atlantic, the Florida coastline now barely visible in the distance, but I didn’t think too much about it. Soon, however, I began to notice the swells were getting bigger—bigger than I remembered from past cruises. Much bigger. Before long, the captain made an announcement from the bridge that we would soon be entering some choppy waters but that it shouldn’t be too bad. Ten minutes after that, from seemingly out of nowhere, a giant swell rolled underneath, causing the huge ship to rise upward at a disconcerting angle. After cresting the wave, the ship came thundering back down, causing all the passengers to cry out in unison, “Woooo!” It was an exhilarating, roller coaster feeling and everyone actually seemed to enjoy it. You could hear people laughing and there was a general sense of merriment.

This sense went away quickly.

The giant swell turned out not to be some kind of rogue wave but one in a long line of continuous swells that became bigger and bigger. The captain came back on the PA system to tell us things were “getting a little worse,” and ordered everyone inside, where some of the passengers suddenly looked toward me, as tour leader, for some kind of reassurance. Maybe this was normal. Maybe I’d been through this a million times before. I smiled and said I was sure we’d be just fine.

“Ships like this were built for seas of all kinds,” I said. Frankly, I’d never seen seas like this. Up and down the ship went. People were hanging on to anything they could grab to keep from being tossed around. In the dining room, the tables, with their crisp, white tablecloths, were being tossed around like clothes in a washing machine, silverware jangling all over the place. Then came the vomiting. One person here, one person there, and then a sudden contagion of vomiting. I had to get out on deck despite the captain’s orders.

For some reason, I needed to see how big these swells really were. And when I made my way on deck and looked at the ocean around us, I was stunned by the size of the waves. They were monstrous. Enormous. But also awe-inspiring. I found myself amazed by their power and force. Meanwhile, I looked out over the pool where the calypso band had been playing just a half hour before to see chaise lounges and deck chairs flying across the deck and over the railing into the raging waters. The water in the pool was mostly gone, and what was left was sloshing back and forth, slamming into one side of the pool and then the other.

The captain made another announcement. We would be attempting to turn around to head back to Fort Lauderdale. “Please hold onto something,” he said. Out on the deck, I could see why the operative word was “attempting.” Up until then, we’d been heading perpendicular to the waves. This was causing ups and downs, but we weren’t being buffeted from the sides. In the midst of a turn, the ship would be put into a position parallel with the great waves. I remembered the movie The Poseidon Adventure. I knew what happens when a big enough wave rolls into a ship broadside. It didn’t seem outside the realm of possibility that the waves could push the ship beyond its 60-degree threshold of list. Once beyond that, up would be down, and down would be up.

I found a life preserver that I put on and held tight to a support pole, deciding that my best chance was on deck. I didn’t want to be trapped below if the ship rolled and went under. For a moment, it went through my mind that perhaps I should be inside with my passengers, the dutiful captain going down with the ship. I wasn’t the captain, of course, but, in a manner of speaking, I was the captain of my tour. But, by now, the ship had begun making its turn, water was washing over the deck, and I knew that if I let go of that pole, I might go flying over the rail like one of the chaise lounges. I had no choice but to stay put and hang on for dear life.

You’ve probably guessed the ending to this story. The ship made the turn successfully and we made it back to Fort Lauderdale safely. But this incident ended up more than just a fun story to relate at a party. It happened thirty years ago, and yet I remember every second of it like it was last Tuesday. It goes without saying that I felt uneasy out on that deck. Scared? Sure. A little, anyway. But what I remember so clearly, and why this incident became so significant for me, so embedded in my mind, was the feeling I had out on that deck that went beyond fear. Or excitement. Or exhilaration. I felt . . . everything. My senses were radically heightened. I became acutely aware of my surroundings. It plays in my mind now as if in slow motion and I can still see it all. I was in the moment. I was alive. I was present.” 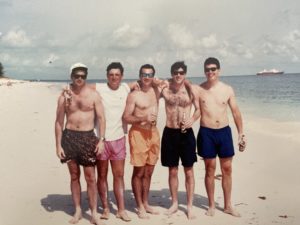 At Peninsula Papagayo, outside of Liberia, Costa Rica Jim's Perspectives:  Costa Rica is one of my favorite countries in the entire planet, first traveling there in 2006, and have been there 10 times since. In 2008, I had an opportunity to help build eco-rooms at a...
Read More

Lake Assal, the lowest point in all of Africa Jim's Perspectives: Djibouti, uninterestingly, translated means "the pot" ... and this is one of those countries that is mostly unremarkable. It is a molten waste land: miles and miles and miles of nothing but black...
Read More