Bhutan is guided by their Gross National Happiness predicated on these four pillars:

The top things I did while in Bhutan:

The story goes that in the 8th century, Guru Rimpoche flew on his flying tigress to conquer the tiger demon which was tormenting the local village. Rimpoche meditated for 3 months in the caves toward the top of this Himalayan peak. In 1692 local monks built a temple to pay homage to the Guru, who is worshipped by the Bhutanese along with Buddha. The monastery is constructed on a precipice, which is said to be held on the mountain by the delicate hair of a woman’s face.

The climb is very steep and can take between 1-3 hours depending on your fitness level and the weather conditions. We stopped for lunch halfway through which also gave us refuge from the rain. After eating we hiked up to ~10,000 feet and marvelled in the views of this sacred monastery. Regardless of one’s faith, it’s impossible not to be moved by seeing this place and appreciating its importance to Buddhists who regard it as their “mecca”, to be visited at least once during their lifetime. We passed through a waterfall and then made our way into the temple. While inside we had the chance to meet the spiritual leader, and we discussed enlightenment and achieving contentment. 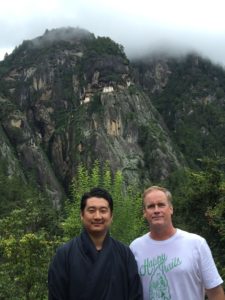 Farmers take the entire skins, and dry them on their roofs for 2-3 days. Afterward they put them over the fire which shrinks them down; they are soaked in water overnight. The char marks are scraped off, and then the skins are pressure cooked for 20 minutes. Chewy and fatty. Kinda reminded me of a chewy pork skin. 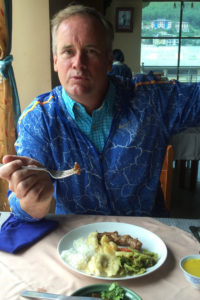 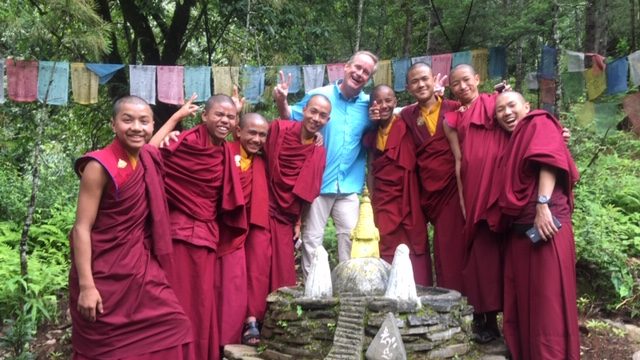 Hamming it up with some monks … no talking … just laughing!

While climbing to the summit, there were several thought-provoking signs along the path. 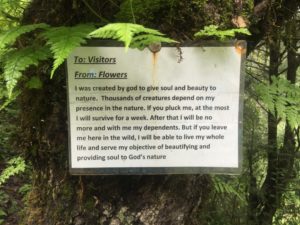 After arriving at the top I was given a primer on Buddhism.

The “wheel of life” begins at birth, 1) an innocent, followed by 2) shaping one’s direction, 3) jumping from thought to thought, 4) searching for meaning, 5) development of senses, 6) becoming attached, 7) experiencing the pain of attachment, 8) developing desire, 9) wanting more and more – greed, 10) achieving and  becoming,  11) new life is born, 12) you die

I had the opportunity to meet with the principal of this university, and we discussed these questions I posed:

There is a sign on the way up here that says “Happiness is not ready made, it comes from your own actions.” Please explain what this means. 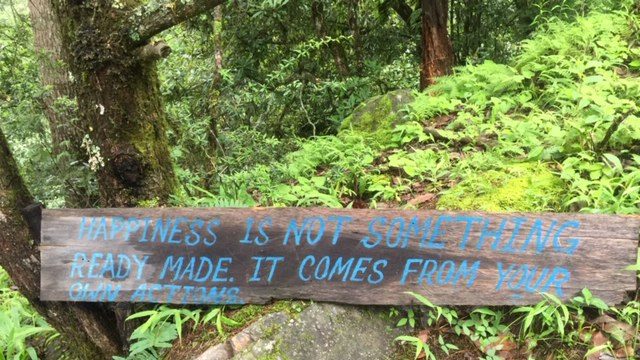 Wonderful, inspirational life lessons on the way to the monastery.

He replied by saying that we are not born happy and that happiness is not instilled in our hearts. It comes from our minds …and it is a choice we make whether to have it or not. But it doesn’t suddenly appear.  It must be practiced, and it comes from goodness, which too must be practiced. One must start small, thinking good thoughts and doing good deeds, and then bigger and bigger, more and more.

I then asked, “If nirvana comes from expelling the poisons from your mind, that comes from meditation, and being able to focus only on the good, correct? What are some of the basics of meditation?”

Most of the young monks (and most people), if I ask them to focus on a statute, cannot do so for more than a few seconds without their minds wandering. This is something which must be practiced day after day, month after month, year after year.

My next question was, “Can a person living in the modern world still find happiness and contentment?”

His answer:  “Of course. But it’s much easier to do living as a monk, having renounced all material possessions. It’s possible, but you must focus on renouncing the three poisons and living by good.”

As one drives through Bhutan, you will see prayer flags – they are everywhere. There are 2 types of flags, horizontal and vertical, which are by the road side, and are for good luck. The colorful flags represent the elements of nature: red (fire), yellow (earth), white (wind), blue (water), green (forest). The large clump of 108 white flags on mountain sides are prayer flags for people who have passed away.

Prayer wheels can only be spun clockwise, and traffic patterns follow. Speaking of traffic, there are no traffic lights in the entire country, only a very cool traffic cop. 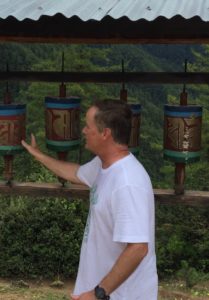 Karma reigns supreme. On the long hike up to Tiger’s Nest my guide moved several insects off the path, convinced they had assisted him in another life. Dogs are revered because Buddhists believe that after wandering between life realms for 49 days, dogs rescue our souls and quench our thirst. Speaking of dogs, many run rampant through the streets and sleep their days away in the streets. History and folklore intersect beautifully, as ___ begins with Guru Rimpoche’s flight on a flying tigress. Did flying tigresses exist – I didn’t think so either, but after seeing the takings… I’m second-guessing 🙂

This is a dreamy and magical place, almost surreal. I loved every minute I spent in Bhutan and look forward to returning one day with my family.