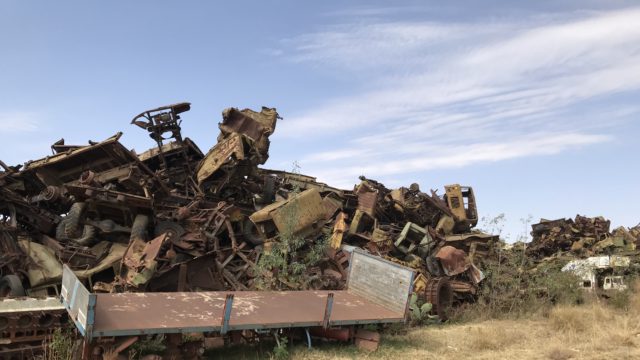 Eritrea stands for “Red” due to its proximity to the Red Sea. The capital is Asmara, and 6 million people live here. Main languages are Tigrinya and Arabic, followed by Tigre. In the country’s more commercial cities, more English speakers can be found. The country is religiously split between Islam and Christianity. Environmentalists and fans of post-consumer products will enjoy the Medeber Market, which is filled with shops and stalls with products made from re-used items, fabrics, metals, and other materials. This is a great place for finding trinkets and other gifts that are truly unique.

An interesting fact is that Eritrea is a country where women have been known to take part in battle alongside men from as far back as 1810 AD, and that women made up a large percentage of the freedom fighters that sought to liberate Eritrea from Ethiopia. The Eritrean People’s Liberation Army was the most female-populated liberation army in the world.

Wow, such a cool country-think of a nicer version of Cuba! Definitely worth visiting if you’re in the region. Located on the Red Sea across from Saudi Arabia, Eritrea has been dubbed the North Korea of Africa, which I believe is an unfair moniker. Why the harsh harassment of Eritrea, given the despots in charge throughout Africa and the oligarchies in the Middle East? Yes, it’s true the government nationalized key industries in 2005, à la Venezuela. However, this country when measured against other African nations has much that they don’t: clean, safe streets, no visible dire poverty, and a strong middle class. And, Asmara happens to have the coolest, most unique architecture of any capital in Africa. The 19th century art deco and Cubist influence of Italian architects are everywhere, and their buildings are mostly in decent shape. Even if you’re not an architecture buff (I wasn’t), I implore you … go and check that out. The finest in Eritrea is the post office, which is the most beautiful building I have ever laid eyes on.

The Tank Graveyard located just outside the city is fantastic. Understanding the 30-Year War Eritrea fought with Ethiopia (1961-1991) is essential to getting to know this country. The graveyard is full of Ethiopian and Eritrea’s vehicles and tanks used in the war. This place is truly a somber reminder of the 100,000 people who died during this conflict. The peace between Eritrea and Ethiopia has been fragile and only “normalized” in 2018, the same year that flights resumed between the countries.

I desperately wanted to go scuba diving at the coastal city of Massawa but couldn’t make it there. Rumor has it that the corals and fish are spectacular in Eritrea. I ended my journey here by driving on the winding roads towards Massawa to see the railway tunnels. Although the train only runs about 20 miles outside of Asmara there are over 40 tunnels through this mountainous region. If I ever make it back to Eritrea, what a wild and harrowing train ride that would be!

In 2018, I stayed at the Asmara Palace which is regarded as a five-star hotel on the web. No way; I’d give it 3 stars. You can tell that this was once a nice hotel, but it is poorly run and managed, symptomatic of a government run operation. The hallway carpets were filthy, room service trays remain for 24+ hours, and the hotel breakfast buffet is a joke, and the lobby reminds me of an old Russian hotel with people lazily sitting around.

Jim's Perspectives: Visited this island twice in 2017, a tiny little island in the Pacific about 1900 miles north of Australia. Nauru (pronounced Now-RU) has the distinction of being the smallest island country in the entire world and has the second smallest...
Read More

The capital of South Korea is Seoul. About 50 million people live in here, and the main language is Korean. English, however, is growing due to tourism - many restaurants, household products, subway signs, and other locations have English translations. Koreans are...
Read More

Care to guess what they grow a lot of in St. Vincent?                 There are so many banana plantations all over this beautiful island and I was just trying to sample one a fresh one! The main industries in St. Vincent are...
Read More