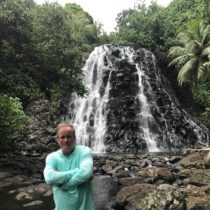 This is an up-and-coming country, with endless possibilities. Flying into Pohnpei you pass by the light blue outer reefs and then by Sokehs Rock, a much smaller version of Cape Town’s Table Mountain. FSM’s economy is based on farming and fishing and its government employs a whopping 60% of the population (funded by the US Compact which expires in 2023). The population is exploding and 50% are under 24 years old.

When I arrived in Pohnpei (’17), my ride didn’t show and Anthony Silbanuz with Sunset Car Rental was so nice and dropped me at my hotel. Speaking of hotels, the Mangrove Hotel is (by far) the nicest hotel in Pohnpei. All rooms overlook beautiful Mangrove Bay and Sokehs Rock, and Valentina will set up diving and other types of tours as she did so fantastically for me. Adjacent to the Mangrove is a great sushi restaurant. 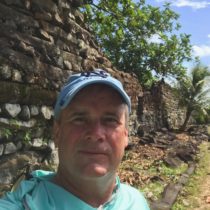 Because the Mangrove was full of surfers riding the island’s amazing waves, I was forced to stay elsewhere and ended up at the Oceanview West Wing. While the view and restaurant were great, the rooms were reminiscent of a 2 star roadside motel, and certainly not up to Western standards. My towel had crust on it. There were critters in the room, and my pillow stunk.

The average worker earns $3-5 a day in Pohnpei, and the prices of most things are very cheap. For example, a taxi ride to most anywhere on the island is $1.00. 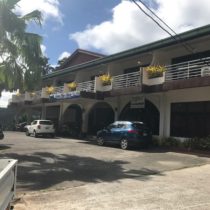 What’s there to do in FSM? The diving is wonderful, and Palikir Pass shouldn’t be missed.

Here are the other top things to do:

At the Dead Sea reading a newspaper! Literally at Armageddon! On the Sea of Galilee ... near where the “Sermon on the Mount” was preached. In Jerusalem near the Church and the Mosque Reflecting at the Garden of Gethsemane Jordan River Country Information: Israel, a...
Read More

In tropical Samoa (known as Western Samoa until 1997), founded on New Year’s Day in 1962. About 191,000 people live here (2013), and the official languages are English and Samoan. Most Samoans are Christian, Catholic, or some other Christian denomination. Its main...
Read More

The famous lions in downtown Sofia, Bulgaria, Monument of the Unknown Warrior Kutrubes Travel planned an exquisitely complicated tour for me through "eastern" Europe, helping me to make the most of seeing the highlights of these countries in the most meaningful way,...
Read More