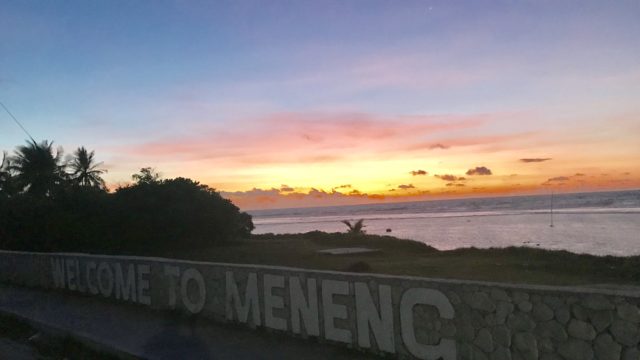 Visited this island twice in 2017, a tiny little island in the Pacific about 1900 miles north of Australia. Nauru (pronounced Now-RU) has the distinction of being the smallest island country in the entire world and has the second smallest population of any sovereign country, next to the Vatican.

This is a sleepy little island, seldom visited by tourists, probably because #1) they do not make it easy for tourists to get a visa here, and #2) the national airline Nauru Air is not the most reliable carrier. Inhabitants settled here about 3,000 years ago, they were likely Micronesians and Polynesians, and there are 12 clans or tribes on the island. And as I’ve mentioned, this place was calm and tranquil and was called “Pleasant Island”. However, in 1830 when Europeans, from whaling ships, started trading with the locals here.  The locals traded food … and the Europeans traded alcohol and firearms … disrupting the peaceful lifestyle that had existed here for 3,000 years. A 10-year civil war ensued, wiping out a third of the population.

In the year 1900, phosphate was discovered in Nauru, and it’s believed that the massive stores of phosphate here were from the millions of sea birds that used to call this island home. What’s phosphate used for? Crops and bombs.

Fast forwarding to the early 1940s and the Japanese are on the offensive and had pretty much conquered every island in the north and South Pacific. The Japanese arrive here in August of 1942, #1) to steal the phosphate and #2) to use this island from which they could cut off the supply lines between the US and the Australians.

But here’s the REAL story of the impact of the war on Nauru:

The Japanese were incredibly harsh and rounded and sent most Naruuans to work as laborers on the island of Chukk, where conditions were awful. They gathered up 39 leprosy survivors living on the island, put them on a boat and then fired on and sank the boat in the middle of the ocean.

Important to note that by the time that Japanese were firmly established here, they were no longer on the offensive, and after being defeated by the United States at Midway they were now on the defensive. They installed 12.7 mm anti-aircraft guns on Command Ridge, pillboxes on the beach and even built an underground hospital. The Americans smartly decided not to invade and instead pounded Nauru from the air and from the sea, destroying the airstrip that is now serving as the International Airport.

Formerly called Pleasant Island, Nauru is a phosphate island country in Micronesia that gained independence in 1968. The capital is Yaren. About 10,000 people live here, though with immigration, there may be more. The official languages are Nauran and English, and the main religion is Christianity. Its primary export is phosphate which is easily mined from the surface land. It also makes money from coconut goods and, for a few years, by (not necessarily legally) being a tax haven when many mining areas ran low on phosphate resources. The weather is tropical with a wet and dry season. The time zone is 17 hours ahead of EST.

An interesting fact about Nauru is that it is the processing location for refugees looking for asylum in Australia. Many people from poor Asian countries set sail for Australian islands, and if they are intercepted they are sent to Nauru. Australia is trying to get the word out that if refugees are sent there … they may never get resettled, so they end up staying. Also interesting is that Nauru was once owned by the Nauru Phosphate Corporation, which made huge profits – so at one point, Nauru had one of the highest living standards in the Pacific.

Not my favorite destination in the Pacific, although I likely might’ve felt otherwise had the weather cooperated and I had been able to get to the rim of the famed Tanna Volcano, on which you can feel it rumbling with molten lava spitting from its cone. While it...
Read More

Typical street scape in Guinea Jim's Perspectives: One of the last countries to be colonized by the French in 1890 and was one of the first countries in West Africa to gain their independence in 1958. The capital, Conakry is a big hustling bustling mass of a city that...
Read More

Overlooking Albania in 2015 Kutrubes Travel planned an exquisitely complicated tour for me through "eastern" Europe, helping me to make the most of seeing the highlights of these countries in a meaningful way. I started out in Romania, flew to Bulgaria,...
Read More