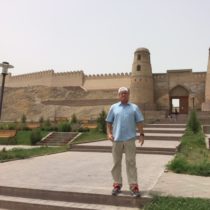 To get from Turkmenistan to Tajikistan in ’16 I had to fly to Dubai, endure an 6 hour layover and then fly 3 hours to Dushanbe. Tajikistan is the smallest of the “Stans” in terms of population and definitely the poorest. This country has recovered little since its Soviet occupation. It’s uncanny how poorly the Soviets built things. After traveling through the world I am always amazed and saddened by the lack of creativity of Soviet-era architecture. In contrast to other masterpieces being built in Europe at the time, it’s clear the USSR were strict utilitarians. I’m reminded that system failed miserably for several key reasons: the government cannot effectively be the sole caretakers of its citizens, providing jobs, food, health care, products and services, education, etc… I fear the US is headed in this direction, and have seen the disastrous effects of socialists’ communist theology and practices. 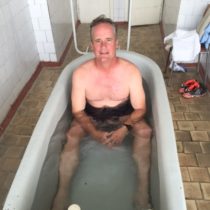 stan is a stark contrast to its neighbors Azerbaijan and Armenia. Its noisy streets are crowded with old beat up cars imported from Europe, there for their last hurrah. Actually, I take that back, the Tajiks import old Mercedes from Europe, use them, and then sell them to Afghanis (their southern neighbors) where they will die.

There is one good hotel in Dushanbe, the Sheraton, and little else there looks up to Western standards. The government has built a half dozen new parks  and monuments, including the world’s largest flagpole—very gaudy. But they built these things with money that should have been spent on roads.

We went to the Olbi Gan Sanitarium, just outside of Dushanbe and I had a soak. Also, took a jog with a boy transporting hay by donkey. Overall, not a place where I’d likely return, but the people couldn’t have been nicer or more hospitable, wish I’d had time to visit the Panin section in the east. 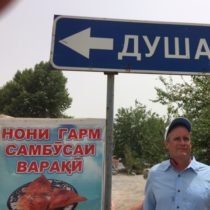 -Tajik is the size of Rhode Island and the name of the country means “Person with a crown”
-Right smack in the middle of the silk road and Tajik provided fruits and veggies to traders
– 8.5 million and growing rapidly
-How do you know if a Tajik woman is married or not? Most women don’t wear rings so you can tell by her eyebrows. Married women pluck their eyebrows, unmarried women do not.
-Tajik shares boards with Afghanistan and used to be one of the world’s biggest markets for opium smuggled across the border. Little English is spoken here. At the airport, I was asked by airport security to show all currency that I had in my possession. They flipped through any 50$ and 100$ notes (I was only carrying about $500 cash) and after seeing it they asked if I would share some of it with them. That was definitely a first!

Highlights:
-Soaking in the sanitorium
-running with the donkeys
-cutting grass with the locals and military stopping me—it’s all about control in this country!

1992: Frogner Park in Oslo, Norway Uh, too weird. Frogner Park, Oslo, Norway in 1992 Visited here in 1992, and hope to return soon! In Norway, the capital city is Oslo. There are officially 5.5 million Norwegians living here. The official languages are Bokmal...
Read More

Riga has a wonderful downtown vibe; imposing St. Peter's church in the central square Took a trip organized by MIR Travel which started out in Moldova, then to Ukraine, on to Belarus, Lithuania, and ended in Latvia. Latvia cannot be visited without exploring Riga,...
Read More