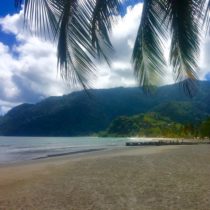 The hidden jewel of the island is near Monacas Bay, which is reminiscent of Costa Rica. It wouldn’t surprise me to see the Four Seasons build a resort there. If you go, you must have a blacktip shark sandwich from Richard’s Bait & Shark.

This is a country dependent on oil and gas, which explains their recent stardom. However, not to worry because the locals strongly believe that “God is trini” and that he looks after them in all things. Trinidad and Tobago used to grow sugar cane but abandoned it … and now they grow marijuana, a much more profitable cash crop.

The government subsidizes gas prices here … it’s just $.15 per litre!  However, while this is great for encouraging productivity, the unintended consequence is horrible, horiffic traffic. 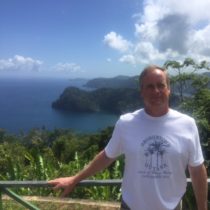 As a volcanic island, its beaches have black sand—a deterrent to attracting tourists. However, Tobago is known for its white sand beaches and attracts the jet-set crowd.

Overall, the country has a very high standard of living and its people are very pleasant and helpful. 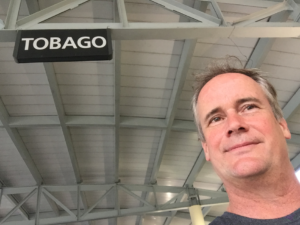 Jim & Some Locals in Mazar Sharif, in Northern Afghanistan Country Information: The capital of Afghanistan is Kabul, surrounded by beautiful mountains. About 35 million people live here. Afghanistan’s official languages are Pashto and Dari, though a small portion...
Read More