The capital of Turkey is Ankara. There are approximately 81 million people living here. The official language of Turkey is Turkish, but Kurdish is also spoken. The majority of Turks are Muslim, mostly Sunni.

Have been to Turkey twice, once with my dad when visiting Kusadasi, a coastal town approximate with the Greek islands.  The second time I visited, I spent several days in Istanbul, Turkey’s largest city. Went to see the awe-inspiring architecture of the TopkapI Palace and the Sultan Ahmed Mosque. And of course, I spent 4+ hours in the world’s largest market, the Grand Bazaar. The Grand Bazaar covers approximately 61 streets and has over 4,000 shops!

One of the highlights was going to a Turkish soccer game, along with 50,000 of my Turkish friend who are also Besiktas fans!  It was CRAZY! 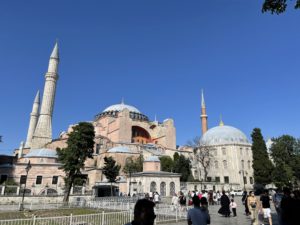 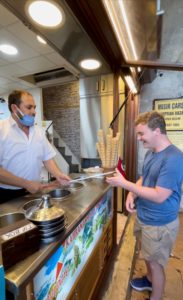 One of the dancers In Mozambique learning how to weave Country Information: The capital of Mozambique is Maputo and the main language is Portuguese and the religions in Mozambique are diverse. A sizable chunk of the population is Roman Catholic, followed by an atheist...
Read More

Janette ... the love of my life The highlight of the my trip in '16 was having the chance to visit an Ahal-Teka horse farm where I fell in love with Janette, a tall thin blond with blue eyes, long legs and silky skin. I miss her... The capital of Turkmenistan is...
Read More

The road toward Haouf, Yemen Jim's Perspectives: Located in the southern end of the Arabian Peninsula, Yemen has a beautiful coastline that stretches about 1200 miles up toward Oman and toward Saudia Arabia & the Red Sea. I traveled overland from Salalah, Oman to...
Read More