The highlight of the my trip in ’16 was having the chance to visit an Ahal-Teka horse farm where I fell in love with Janette, a tall thin blond with blue eyes, long legs and silky skin. 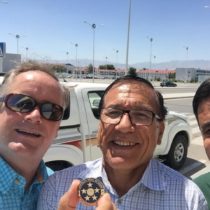 Jabbar Ustad, my all-star guide in Turkenistan, along with driver Mishi.

Truly one of the most enjoyable unique places that I’ve visited. From their Turkish heritage, the Turkmen are incredibly hospitable, most likely stemming from their nomadic days.

Driving down Ashgabat’s streets was one of the most surreal experience of my life. In the “new” part of town, 20-30 story towers line both sides of their wide city streets and are white– and I don’t mean all the same. All have white marble exteriors and green roofs. The government mandates that all buildings be built this way in order to reduce the city’s temperature. However, I suspect this is less about temperature than it is about conformity and uniformity. My comments shouldn’t be misunderstood because Ashgabat is brilliant– just a bit odd. Its streets are kept spotlessly clean by crews of cleaning trucks and armies of babushkas. The monuments are many, as are the parks and water fountains. But all lack one thing: people. In the two days I visited Asgabat I was the only “tourist” looking person I saw in the entire city.

There is no one driving on the spotlessly clean roads at the hotel where I stayed. Visiting the parks, riding the city’s Ferris wheel. Maybe I missed something. Perhaps locals don’t have time to visit these places or drive around during the day. Regardless, visiting Ashgabat was like visiting Disney world with 14 people in the park it would’ve been more fun with more people, but fun nonetheless.

Speaking of hotels, I opted for the Yyldyz which sits prominently on a hill over looking the city. It was spectacularly luxurious, second only to the Burj Al Arab Hotel in Dubai. My room easily had to be 1500 sf, contained every amenity possible, including top-shelf Bulgari products in the bathroom.

I’s a good question to ask: where does all of this wealth come from? The country has vast oil reserves in the Caspian area (northwest) and is the world’s 5th largest producer of natural gas. The government clearly re-invests its wealth back into the country’s infrastructure in contrast to many country’s in the region.

The country’s current president has begun leading the country out of its dark Soviet Union past and has certainly built a gem of a city. But the secrecy or suspicion still exists. Tourists must be accompanied by a guide, Facebook and Twitter are blocked (although Turkmen use VPNs to access) and government security roam streets and market places looking for reasons to assert control.

Overall, a delightfully weird place to visit and would be on my list of places to return.

At the famous Stari Most, the Old Bridge, '15 Kutrubes Travel planned an exquisitely complicated tour for me through "eastern" Europe, helping me to make the most of seeing the highlights of these countries in the most meaningful way, without just zipping through. I...
Read More

Riga has a wonderful downtown vibe; imposing St. Peter's church in the central square Took a trip organized by MIR Travel which started out in Moldova, then to Ukraine, on to Belarus, Lithuania, and ended in Latvia. Latvia cannot be visited without exploring Riga,...
Read More