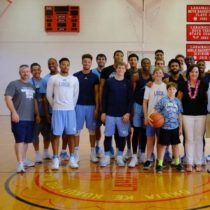 ct is really about the intersection of profit and purpose,” Kitchen said.

The remaining money, after sending Will to Hawaii, will go towards the Community Empowerment Fund, which assists local homeless people transition to home ownership.

Some groups in the project used the football game on Saturday to bring their products to the market. Phil Piasecki, a sophomore pre-business major, and his partner sold rally towels at the game for $5 each.

Piasecki said the time constraints, limited resources and competition between students made the project difficult.

“But luckily, it was all alleviated by the fact that we were doing it all for a great cause and we were all pretty much on the same team in that way, trying to raise money for two great causes,” Piasecki said.

He said the project was realistic because of the challenges, and the humanitarian goals made it worth his time.

“I would just say this whole project, to me, I found it really valuable, because it’s kind of an extreme version of what an entrepreneur faces,” Piasecki said.Marianne Cruzat, a sophomore pre-business major, said the project has not been easy due to time constraints.

Her group started a hashtag, #ThumbsUp4Will, to generate awareness for the project and sold leis at Saturday’s football game. She said their slogan was to bring “Hawaii to Kenan Stadium for Will.”

Other students used a different approach. Juniors Brandon Kang and Ayush Makhija raffled off a brand-new Xbox One S and marketed their project on Friday in the Pit.

“He’s a huge Tar Heel fan and his wish is to go to the Maui Jim Invitational in Hawaii and just cheer on the Heels, so we just wanna make that wish come true,” she said.

Kitchen said this project, which he has assigned for several years, has become very important to him and his students.

“If I can take these students for one second, get them to take their career choice, their life, you know, understand exactly what should guide them through this project, it’s very fulfilling,” Kitchen said.

Brief History: Christopher Columbus came to Antigua in 1493 and the Spanish settlers grew sugarcane and tobacco there. It was colonized by the British in 1632 and remained a British possession until 1981. Jim's Perspectives: In 1993, my wife (who I was then dating)...
Read More

Men playing backgammon in the park. The Russians lost 25 million men in WW2, notice their formal dress and that they still wear their medals from 40 years ago. Super-cool picture ... Russian submarines at port! Country Information: The capital of Russia is...
Read More