Kutrubes Travel planned an exquisitely complicated tour for me through “eastern” Europe, helping me to make the most of seeing the highlights of these countries in a meaningful way. I started out in Romania, flew to Bulgaria, then drove through Serbia, next to Macedonia, Kosovo, Albania, Montenegro, Croatia, Boznia-Herzegovina, Slovenia, and ending in Venice, Italy.

Drove through rural Albania, first visiting Lezhë Castle, built on a hill looking over the Drin River. Then stopped in Shkodra, the commercial capital of the northern Albania on the shores of Lake Shkodra. Under the repressive Communist regime that held the country hostage for fifty years many brave people risked their lives and swam to freedom to the shores of what was then Yugoslavia. 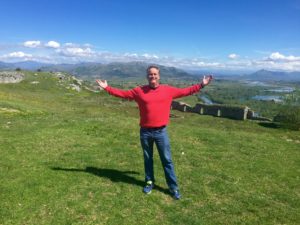 Afterwards had some great pizza in downtown Tirana, where the buildings have bright, vibrant colors and the city streets are filled with green parks and walkways, business places, old architecture, shopping, and authentic cuisine. Need to check out Kolonat, an Albanian fast food chain with a logo similar to McDonald’s.

A fun fact about Albania is that the sign for “yes” and “no” are switched around, where no is shown by nodding one’s head and yes is shown by shaking one’s head. Also interesting is that Albania has over 750,000 bunkers spread out across the land to avoid invasion during their time of isolation when Communism spread across Eastern Europe and the Middle East.

The country of Albania was founded in November 1912 and its capital is Tirana. About 3 million people live here. The main language is Albanian and the largest religions are Islam followed by Christianity. The main exports are textiles, footwear, vegetables, fruits, tobacco, asphalt, metals, metallic ores, and crude oil.

Beautiful Tivoli Gardens in Sweden, 1992 Have been to Sweden twice, once with the family while on a Royal Caribbean Cruise through the region. We visited Visby, one of the best preserved medieval cities in Scandinavia. This ancient city on the west coast on the island...
Read More

New Zealand is one of my favorite places in the entire world ... particularly the southern Island city of Queenstown. This is the world's adventure capital and I just love the place! When I first traveled there in 1992, I visited AJ Hackett's bridge, where bungee...
Read More

.   Went to Poland with my father in 1997, as part of a 12 day GATE 1 tour through Poland, Czech Republic, Austria, and Hungary. In 2009, spent a couple of weeks in Poland with my University of Tennessee MBA classmates. As a class, we spent most of our time in...
Read More