Costa Rica is one of my favorite countries in the entire planet, first traveling there in 2006, and have been there 10 times since. In 2008, I had an opportunity to help build eco-rooms at a community cooperative in Bijagua, a small rural village in the Northwestern part of Costa Rica.

In Bijagua, it’s not unusual to see men on horseback herding cattle or plowing farms with oxen. There aren’t many “gringos” in this area – so I stuck out like a sore thumb particularly when I laced up my running shoes to jog through “town”. The quaint downtown has a dozen or so stores including a bank, a butcher, several markets, bakeries and clothing stores, as well as a motorcycle repair. There is a mesmerizingly beautiful Catholic church a block from the main square.

The Tenorio Volcano towers over and their lush rainforest trails play host to more than 300 types of birds including five species of toucans and 18 species of hummingbirds. Taking a nocturnal walk on the rainforest trails and suspension bridges is something that even the most seasoned traveler will not quickly forget.

Want to see the impact of a small donation?!  Look what happened with the projector I donated:

What do you get when you put a donated projector, a copy of Ice Age 3, 150 kids and two teachers together?

An incredibly successful cinema night in Bijagua – That’s what!
On September 21, 2008 the community gymnasium was transformed into a cinema for the local community to come and enjoy a screening of Ice-Age 3. Over 150 children turned up, with the US.50 cent voluntary entrance fee going to three local primary schools. 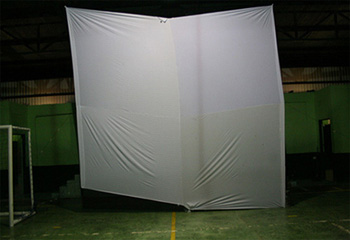 We have visited Pip four since this trip, each time bringing supplies – shoes, books and clothes – for the Heliconias community. Pip and Donald got married and had two beautiful girls since then. They have built a travel business and incredible lodge to attract tourists to the beautiful rainforest trails at Heliconias and to the incredible Rio Celeste waterfall. Our family has “adopted” this community and hopefully we’re able to support them for years to come!

An unusual fact about Costa Rica is that it is one of the only countries in the world without a standing army, which is abolished in 1949. Also interesting is that Costa Rican men and women are called ticos and ticas, while foreigns are called gringos and gringas. An amazing fact is that despite being a small country – only 0.03% of the planet’s surface land – Costa Rica is one of the most biodiverse countries in the world.

Country Information:  The Republic of Costa Rica literally means “Rich Coast”!  It was founded in 1821 and its main language is Spanish. About 6 million people live here, with almost a million people in the capital, San José. A large portion of the population is Roman Catholic, followed by Evangelical Protestantism. Its main exports are bananas, coffee, melons, pineapples, sugar, beef, seafood, and electronic or medical equipment. More recently, though, ecotourism, software development, financial outsourcing, and pharmaceutical developments have started to take over as its main sources of income.  Its time zone is 1 hour behind of EST, though Costa Rica does not use Daylight Saving Time.

A country slightly larger than Utah, Laos is a landlocked country home to approximately 7.5 million people. The capital of Laos is Vientiane. The official language of Laos is Lao, but French, English and various ethnic languages are also widely spoken. The majority of...
Read More

Valentina Permiakova from Kolonia, Pohnpei, Federated States of Micronesia Allois arrived in Pohnpei in 2000’s chasing a wave he has seen on the background of an article in a National Geographic magazine. He started to surf here with friends visiting and eventually it...
Read More