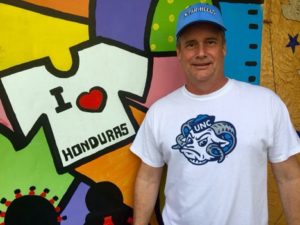 Honduras is known as the bad boy in Central America. And to be honest, with good reason. 1.4 of its 8.5 million inhabitants live in a lawless region. The capital city “Teguz” is paralyzed by fear, caused by nothing less than domestic terrorism. Rival gangs Mara Salva Trucha (smart trout), 13th and 18th street gang members off one another daily and these executions are shown on the local news stations, one after another. But it doesn’t stop at murder. Extortion is a huge problem … and fees paid by small business owners to the gangs is a significant overhead expense. So, what if you don’t pay? You’ll end up dead … or you’ll have to pay for a private security company to protect you.

A fellow North Carolinian I met here had three friends murdered in Teguz last year, and his doctor was murdered for not paying the gang leader. While I’m always vigilant while traveling and don’t normally obsess about security, I took great care while in Honduras. The foreigners who live here told me that gangs will slit your throat for a dollar.

To be fair, Honduras is more than murder, but it’s hard to extoll its virtues. I don’t recommend visiting Copan Mayan ruins or the jungle lodges in Rio Cangrejal because you have to fly into San Pedro Sula (the world’s homicide capital). While I didn’t get to Roatan or Utila I’ve been told they’re safe from the aforementioned troubles.

While in Honduras in 2016, I learned how to make some delicious pupusas – corn tortillas stuffed with every good thing imaginable, including beans, cheese, vegetables, and sometimes chicken. 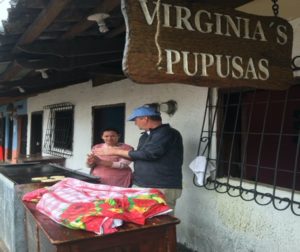 Next up, I tried my hand at sculpting … with a leg-powered wheel. This was exhausting and much more difficult than imagined! 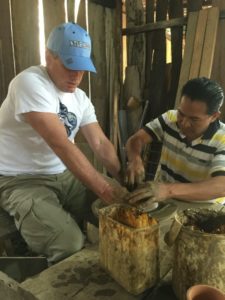 Country Information: Andorra is a landlocked country, sandwiched between the French and Spanish borders. The country is a parliamentary democracy that is ruled as a co-principality by two princes—the French president and a Spanish Bishop. There roughly 86,000...
Read More

So many war memorials in Belarus! Jim's Perspectives: When visiting, the ideal time is to enjoy Minsk at night. Minsk is especially known for the “City Gates”, and Privokzalnaya Square. Be sure to visit some of the many WWII war memorials, namely the site of the...
Read More

Jim's Perspectives: Have been to Belgium several times while in Europe. Drove by the Grand Place, the Palais de Justice, the European Parliament building and then had dinner enjoying some amazing food and cold beer.  It's impossible to visit Belgium without enjoying...
Read More