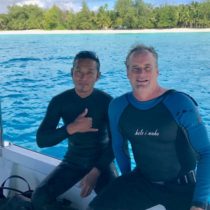 The world travelers ahead of me said that the Marshall Islands were a dump, however, I loved my time here in 2016. I arrived and took a $5 taxi ride from the airport to the center of downtown Majuro. From end-to-end Majuro is 35 miles long and on average is about 100 yards wide. Joe Iteran, my driver assured me it wasn’t difficult to find your way around the capital city and it was impossible to get lost because the road only goes “this way and that way”. 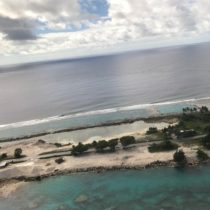 Once in the city center I went upstairs at the Reimers Hotel to have a cold drink while waiting for my water taxi to Bikendrik Island, which was about 30 minutes away. I chose Bikendrik because I’ve become a bit of a hotel snob and Reimers got horrible guest reviews. If roadside motels are your thing, you’d love Reimers, but as there’s not much in downtown Majuro, I chose the pricier Bikendrik, which, in retrospect, was an excellent decision. The island’s proprietors, Lutz and Suzi Keyser, greeted me warmly and immediately showed me to my oceanfront lodge at the edge of the lagoon. The accommodations were clean and crisp; island-chic. The queen bed was heavenly, the bathroom exceedingly clean, complete with an indoor and outdoor shower. But the real attraction was the deck overlooking the tranquil waters. I sat mesmerized for hours, deep in thought, which is not a luxury in which I can normally indulge. The food, all cooked by Suzi, was extraordinary. Hamburgers and fries? Uh, no. For lunch, think beef strudel, for dinner fresh tuna, and parrot fish with sauteed potatoes. Desserts were out-of-this-world. Every morning Suzi baked up fresh croissants, which were light and fluffy. 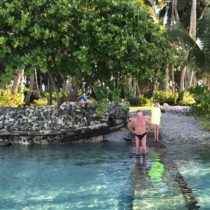 While I was concerned about unsanitary food preparation in Majuro, there was no such concern at Bikendrick. This food was as good as any I’ve eaten at 5-star restaurants worldwide.

Suzi’s husband Lutz is an astronautical engineer and has developed rocket systems in Zaire/Congo, Libya and other countries over the past 40 years. He claims his designs can send a rocket into space for 1/10 the cost of other commercial launch companies. 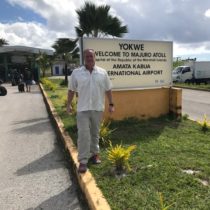 Lutz and I ate most of our meals together (so I wouldn’t have to eat alone) and I cherished my conversations with him and Suzi. I heard harrowing tales of their times in the African jungle with Mobutu, working in Gaddafi’s Libya, how they came to Bikendrick and other stories I hope they will tell you.

When they arrived on the 3 acre island 10 years ago it was just coconut trees, but they have built it into a 3 house paradise.

I went diving with Hiro, a Japanese dive master, who has a reputation of being highly reliable, a rarity in a place where tomorrow never comes and little ever gets done on time. The water was clear and the fish were plentiful, and if I ever come back I hope to go to Bikini Atol. 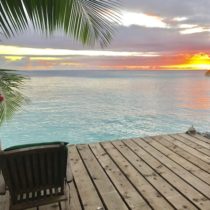 Overall, I loved my time at Bikendrik and both I and the Keysers were sad to say goodbye. Suzi gave me a 5-second embrace before I got on the boat and Lutz a firm handshake. We exchanged final waves before my boat sped off, and I smiled knowing I have discovered one of this world’s truly special travel destinations. 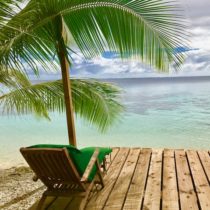 Jim's Perspectives: This is a cool island, one that’s much more Asian than African and if you spend a measurable amount of time in Africa, you’ll notice it from the moment you land at its swanky view airport. Most everything is neat and clean in this tiny gem of an...
Read More

My father and I visited Malaysia in 1995 as part of an Asia trip to northern, central and southern Thailand, Singapore and Hong Kong. While there, the Petronas Towers in Kuala Lumpur, one of              the world’s tallest twin towers, had started construction. They...
Read More

Public transport in Mali! Country Information: The capital of Mali is Bamako. There are approximately 21 million people living here. The official language of Mali is French, with Bambara also spoken by a large percentage of the population as well. The majority of...
Read More