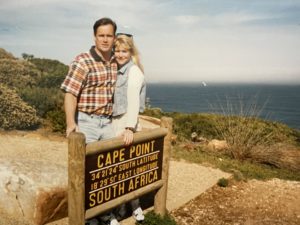 Have been to South Africa twice, once in the 1996 (pic above) and again in 2016 (pics below). When visiting, travelers cannot miss out on a safari at Kruger National Park, a park about the same size as Israel! If you’re lucky, you’ll be able to see the Big 5: Elephant, rhinoceros (black and white)  leopard, lion, and a Cape buffalo! Adventures also cannot miss out on visiting Cape Town for its scenic mountains and beaches. Try the ultimate challenge and climb Table Mountain, Twelve Apostles, Signal Hill, and Lion’s Head all in one day. The view from the tops of each mountain is incredible! Also don’t miss out on the penguins of beach at Simon’s Town, which was my kids’ favorite!

In South Africa, there are three capitals of the country, Pretoria, the legislative capital; Cape Town, the Parliamentary capital; and Bloemfontein, the judicial capital. There are approximately 60 million people living here. South Africa is linguistically rich with 11 official languages! The official languages are isiZulu, isiXhosa, Afrikaans, English, Sepedi, Setswana, Sesotho, Xitsonga, siSwati, Tshivenda, and isiNdebele. The majority of the population practices protestant Christianity. The time zone is 6 hours ahead of EST.

South Africa was home to Nelson Mandela, the leader of the South African anti-apartheid struggle. Apartheid was the system of racial and social inequality that plagued the country from 1948 to 1994.  During his lifetime, he fought to bring racial and social equality to the country. Visitors should visit Robben Island, the home of Nelson Mandela and many other anti-apartheid political prisoners during the apartheid era. While the island is no longer used as a prison today, the prison itself is still standing.

Legendary Tiger’s Nest Monastery, 2016 Jim's Perspectives: Bhutan is guided by their Gross National Happiness predicated on these four pillars: The preservation of the environment, which by law 60% of the country must remain forest for future generations The...
Read More