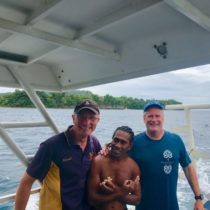 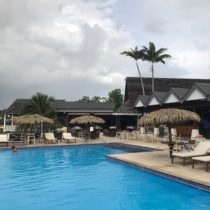 Not my favorite destination in the Pacific, although I likely might’ve felt otherwise had the weather cooperated and I had been able to get to the rim of the famed Tanna Volcano, on which you can feel it rumbling with molten lava spitting from its cone. While it literally rained from arrival to departure (2017), I made the most of my time here by scuba diving and walking the city streets.

Vanuatu’s scuba sites are unremarkable, with just 7-8 dive stops in the sound. The corals, fish and visibility were sparse, but Big Blue Dive shop made the best of what they have, and the staff couldn’t have been more accommodating. 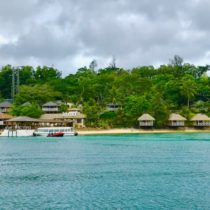 Port Vila resembles most cruise ship port cities, complete with tacky perfume, jewelry and souvenir shops. The fruit and veggie market (see pic) was fun to browse through, as was wandering the local supermarket. The highlight was eating the local catch at an eatery overlooking the water. 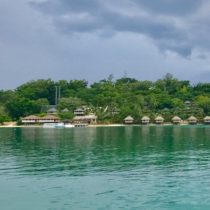 The Iririki Resort looks better on the web than it does in person. Although the waterfront rooms were nice, the overall level of service needs upgrading. The casino staff were the laziest I’ve encountered, and the rest of the resort’s employees were mostly the same, with one bright exception: Lili, who is the heart-and-soul of the place. Without her the place would be moribund. Where to stay in Vanuatu? Havannah Vanuatu. 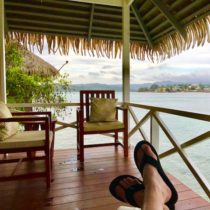 Ruins in Tikal! Jim's Perspectives: Tikal, about 50 miles northwest of the border with Belize, is located deep in Guatemala’s rainforest, was created in 1966 and was the first protected area in Guatemala. At its peak some 1,500 years ago, Tikal was home to an...
Read More

Spectacular beach at Kempinski Hotel on Mahe, 2019 Jim's Perspectives: I must admit that I was a little disappointed with my initial impressions of the Seychelles. Since I was in high school, I’ve dreamt of coming here. Why? It was my vision of paradise: beautiful...
Read More