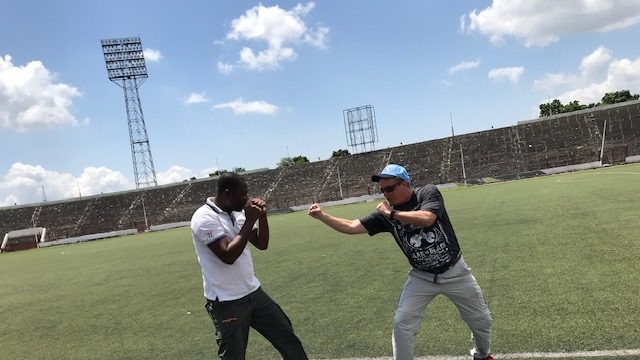 Jim’s Perspectives of the DRC:

Oh my.  Get ready for an adventure if you cross the Congo River from Brazzaville to the capital city of the DRC, Kinshasa. While “Brazzi” is relatively calm and refined, its neighbor to the west is anything but.

15 or so passengers and luggage piled onto a ski motorboat … you know, the type of boat you’d spend a Saturday at the lake on with a few friends.  I do compliment the boat operator because all passengers were given life vests! The boat’s engine revved loudly due to the weight, and the front hull languished uncomfortably close to the water line. When seeing things like this … I remind myself … “This is Africa”!

For any visitors arriving to the DRC who had previously arranged to get a visa in the DRC’s embassy (in Washington, DC, etc) it’s best to bring ALL paperwork with you, including both Invitation letters.  Why? Because if you don’t have both of them … you’ll have to pay! You see, at the “Beach” (the port in Kinshasa”, everyone is looking to get paid, and you are vulnerable to extortion if you don’t have everything! Have Invitation letter (2 copies), your visa to your next destination (2 copies), immunization certificate (and copy) … heck … I even brought proof of funds.

Of all of the countries that I’ve visited to date (157), the DRC, Angola and Venezuela were the most difficult to arrange. While I had to fly to DC to get fingerprinted for Venezuela and Angola, at least the Venezuelan Embassy answered the phone and emails.  Not so with the DRC. After contacting them daily for a month and hearing nothing, I had my Visa company (Visa HQ) call them to check for me, and thankfully I received my Visa a few days later.  Moral of this story is to use a Visa processing service for a DRC Visa.  I was told by my tour operator (Jeffrey Travels in Kinshasa) that a Visa on Arrival could be arranged, for a whopping $500 USD.

Back to the “Beach” in Kinshasa: I wouldn’t want to make that crossing without someone meeting me on the other side in Kinshasa. I heard stories of people detained there for hours, and having to pay $100 to get in.

Next to Lagos, Kinshasa is the second largest city in Africa.  It’s a sprawling metropolis of 7 million people that continues for miles in each direction … think out … not up. This is a war-ravaged country that was the host of “Africa’s World War”, when multiple African neighbors battled it out over ethnic differences.  The country’s name was changed from Zaire in 1997 after new leaders took control of it and now it is known regionally as the DRC.

The DRC is Africa’s second largest country in terms of size and potential.  It has vast natural resources, including oil, gold, diamonds, cobalt, uranium and dense rain forests (timber). It also has many animal species, including elephant, antelope and buffalo. In the east, near the Ugandan and Rwandan borders there are 6-7 habituated mountain gorilla groups that tourists can visit for much less than what you’d pay in Rwanda.

Outside of Kinshasa, I visited the Lola Bonobo Conservation, which looks after ~ 100 bonobos. Genetically speaking, this rare species is the closest to human DNA. Bonobo mothers carry their babies for 9 months, have 1x month menstrual cycles, and breast feed their babies for four years.  Male bonobos reach puberty at 12 years old, and interestingly, this species is the only other that has recreational sex (regularly!).

Insanity at the Bonobo Conservation!

Visited the Adventure Park, the Art School, the train station and Safari Beach, all of which were underwhelming. Safari had a decent restaurant and lovely view of the river … but it’s a long way outside of Kinshasa.

The best thing to do in Kinshasa is to see the old stadium where Ali fought George Foreman in their epic “Rumble in the Jungle”. I had to pay $15 to get inside to see where both fighters trained and fought. It wasn’t hard to visualize people hanging from the bleachers to get a glimpse of this extravaganza!

Besides the bonobos and stadium, the best thing to do in the DRC is to visit the large market. While I’ve been to a zillion markets across the planet, this one was worth seeing because it had an interesting “meat” department, including monkeys and other “bushmeat”. Careful: This market is infamous for is thieves and pickpockets. I kept all belongings in my car and money in a zipped pocket.

Oh, don’t forget … when you leave the DRC you’ll have to pay a $55 departure tax that is NOT included in your airline ticket. One last departing gift before you leave!

The capital city of Bangladesh is Dhaka, the official language is Bangla, and the majority of the population practices Islam. Major exports of Bangladesh include garments, knitwear, frozen seafood, jute goods, agricultural products and leather. Tourists should visit...
Read More

Note the yellow shirt ... this is what the motorcycle taxi drivers wear here Country Background: The capital of Benin is Porto Novo. There are approximately 11 million people living in this beautiful coastal country. The official language of Benin is French, but Fon...
Read More

The capital of Sri Lanka is Colombo. There are approximately 22 million people living here. The majority of Sri Lankans practice Buddhism. The official languages of Sri Lanka are Sinhala and Tamil, while English is used often in government sectors. Major exports of...
Read More